A visit by a peer of the realm has inspired pupils to believe that one day they too could become a Member of Parliament or perhaps even the Prime Minster.

Mohamed Iltaf Sheikh, now Baron Sheikh of Cornhill in the City of London, was elevated to the House of Lords in 2006 after a successful career in the insurance and financial sectors.

Lord Sheikh attended an assembly for Year 4, 5 and 6 pupils at the Cazenove Road primary school. He listened to a performance by the choir with music instructor Abdesellam Bassou, before talking to them about his career, how he became a Lord and what he does on a day-to-day basis. Afterwards, pupils had the chance to ask Lord Sheikh questions and he then visited all of the children in their classrooms.

“The children found it a really fantastic and inspiring visit. Lord Sheikh told the children that education is one of the most important things and that if you do well in school you could also become a Member of Parliament or the next Prime Minster.”

Lord Sheikh was born in Kenya and brought up in Uganda but, although he had already moved to London, his family had to flee to the UK penniless after being thrown out by Uganda’s then leader Idi Amin in 1971. In addition to his career, Lord Sheikh is also active in charitable, community and humanitarian work. Lord Sheikh believes so passionately in education that his own Coat of Arms designed by the College of Arms, signifies its importance. 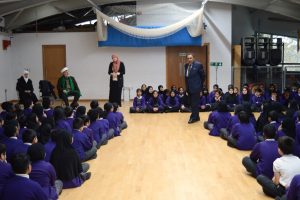 PUPILS at The Olive School, Hackney were visited by Lord Sheikh