Pupils came together with a local school Jewish school to share a message of togetherness and hope to commemorate Holocaust Memorial Day.

Holocaust Memorial Day, held on 27 January each year to mark the liberation of concentration camp Auschwitz, is an international day of remembrance for the millions of people murdered in the Holocaust under Nazi persecution and in the genocides which followed in Cambodia, Rwanda, Bosnia, and Darfur.

Children from The Olive School, Hackney and Simon Marks Jewish Primary School, which are next door to one another, rehearsed together in preparation for their visit to the council chambers at Hackney Town Hall on Monday 28 January, where they performed a moving rendition of No Wars Will Stop Us Singing.

The two neighbouring schools already have links, through the Three Faiths Forum, and regularly work together on a variety of projects to help the children build friendships, such as a joint board games club.

Also visiting the pupils for a special thought-provoking assembly about the Holocaust on Monday 28 January was Rabbi Herschel Gluck OBE, president of the Stamford Hill Shomrim – a voluntary Jewish Neighbourhood Patrol Group – chairman of the Arab-Jewish Forum and chairman and founder of the Muslim-Jewish Forum.

“It is the 80th anniversary of the start of the Second World War this year and as its horrors fade from living memory, it is more important than ever that we encourage dialogue, friendship and understanding between all faiths, as a reminder to our pupils that good will always overcome evil.” 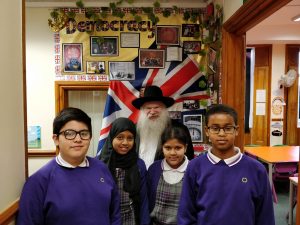 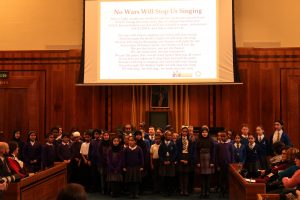 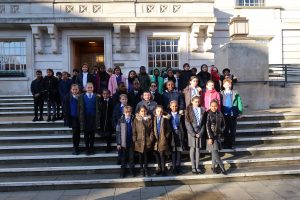 PUPILS were visited by Rabbi Herschel Gluck OBE who spoke to them about the Holocaust. They also came together with Simon Marks Jewish Primary School to sing at Hackney Town Hall to commemorate Holocaust Memorial Day.