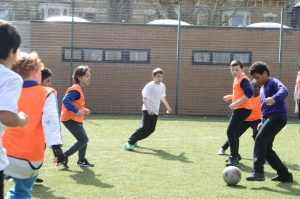 It was a thrilling game, with huge crowds from both sides. It was billed as a friendly, but the game was anything but.

The first half was a rude awakening for the Olives, as they were pushed back for most of the half. They fought with steel and determination however, keeping Simon Marks’ strikers at bay. Aadam made a few stops to keep the game even going in to the second half.

The second half brought a flurry of changes as Mr Ibrahim wanted to analyse the rest of his squad. This brought about stability and created a good base to now go on the attack. Olive were gaining momentum and even came close with shots from Mohammed and Haroon.

The third and final half brought about more changes to the team. Mr Ibrahim and the team could smell blood and were determined to take something away from the game. Chances fell to the strikers, with Simon Marks on the back foot, with Mustafa coming closest. However, against the run of play, Simon Marks struck. It was a fantastic double save from Aadam which kept them at bay, but with the ball loose, the striker poked it in to make it 1-0. It wasn’t long before the final whistle was blown.

A fantastic performance from all the boys, playing and representing the school in their first ever football match. They played with great camaraderie and grew as the game went on. No doubt the next game will bring a better result.

Man of the match – Aadam Mangera for a host of saves, keeping Olive in the game. 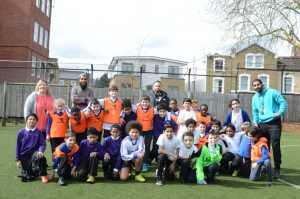